The World Economic Forum created an intriguing set of 50 'global risks'. The global risk that respondents rated most likely to manifest over the next 10 years is severe income disparity, while the risk rated as having the highest impact if it were to manifest is major systemic financial failure. There are also two risks appearing in the top five of both impact and likelihood – chronic fiscal imbalances and water supply crisis.

The most 'worrying' risks are up and to the right (higher probability and high impact).

The Top 5 Global Risks by Impact have evolved notably over the past few years.

The Top 5 Global 'Most Likely' Risks have also evolved but Economic remains the most dominant.

Italians head to the polls on February 24-25 and never before the political scenario has been so chaotic and appalling.

We are witnessing new political movements like the 5 Stars movement climbing up to third place in a matter of months and never before we have seen Germany actively entering the Italian political debate to try and keep Berlusconi at bay.
All this is adding up to financial uncertainty on the future of Italy and at large of the Eurozone.

Pier Luigi Bersani, who heads the centre-left PD was considered the assumed new prime minister just a few short weeks ago, at least in the Chamber (the lower house of parliament).

It's all up in the air now as Silvio Berlusconi's PDL has staged a massive rally in the polls.

Berlusconi has been on a rampage lately blaming Germany and Chancellor Angela Merkel for the unemployment problems in Italy, promising to refund the hated IMU (property tax) and more exotically declaring that tax evasion is justified.

Beppe Grillo's Movimento 5 Stelle (Five Star Movement) which has been largely ignored in the Italian press has been wildly popular at rallies. Grillo has a chance to come in second place.

Mario Monti, who heads the centrist Con Monti per l’Italia (With Monti for Italy) coalition, is running a very distant 4th. 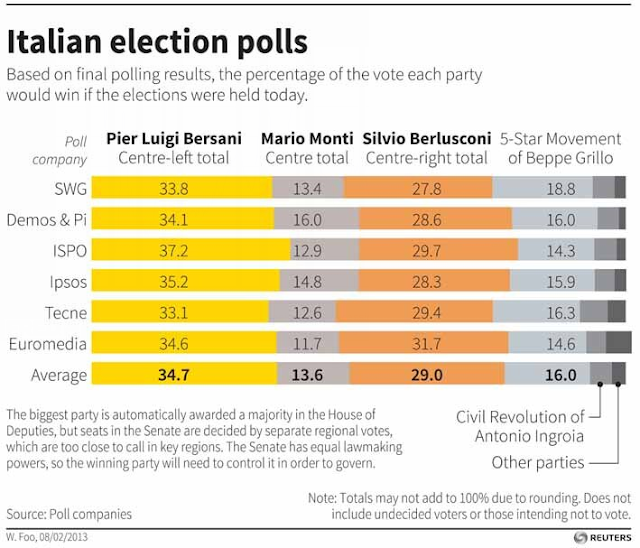 With such little difference between Berlusconi and Bersani, and with huge rallies for Beppe Grillo and Berlusconi, any outcome is possible.

Here are a few examples from the story.

German Finance Minister Wolfgang Schäuble reportedly said (but later denied) "Silvio Berlusconi may be an effective campaign strategist, but my advice to the Italians is not to make the same mistake again by re-electing him."

Polenz, a senior member of Chancellor Angela Merkel's Christian Democrats, said: "Italy needs political leaders who stand for the future. Berlusconi is certainly not one of them."

One Italian bank even went so far this week as to issue a report arguing that a Berlusconi election would almost certainly force the country to apply for emergency bailout aid from the EU. Mediobanca, Italy's largest investment bank, wrote that "a last-minute Berlusconi victory would scare the market sufficiently to put pressure on the spread."

Spiegel reports Berlusconi's Faithful: 'Only Silvio Can Save Italy'


Adoration of Berlusconi in Italy remains widespread. In the parallel universe occupied by his followers, there is no room for doubt about Berlusconi and lines are clearly drawn. Silvio is good and the others are bad.

These fans gather at his speeches, like the Saturday rally in Palermo, where thousands crowded into the venerable Teatro Politeama. There were women in long fur coats and fine gentlemen in three-piece suits. Dock workers like Ferrante squeezed with them through the entrance, everyone pushing and shoving each other like adolescents at a rock concert. The hundreds who didn't make it in must stand outside.

Fully a quarter of Italians are prepared to vote for Berlusconi again. It is an astounding degree of homage paid to man who faces allegations of abuse of power and bribery; who faces the scandal surrounding the underage escort Karima el-Marough, alias Ruby Rubacuori; who has been blasted for blatantly misogynistic comments; and who broke many promises as prime minister. Instead, the opposition, left-leaning judges and even the Germans are blamed for all that is not right with Italy.

At best, Bersani will win the Chamber and lose the Senate. That would likely result in a hung parliament.

Anti-German sentiment in Italy is high already. The entrance of German politicians into the battle may fuel that sentiment in a major way.

It is conceivable "Silvio the Savior" pulls off a stunning upset win in both the Chamber and Senate, but a Senate victory would still require a coalition (no party will come close to a majority).

It may be difficult if not impossible for any party to form a Senate coalition if Monti's party does poorly as expected.

Regardless Berlusconi there seems to be no good outcome for Italy.
on February 21, 2013 1 comment: Links to this post